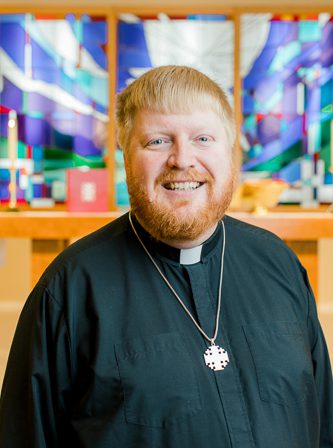 The Rev. Peter Frank was called to be Epiphany’s third Rector in August of 2014.  Previously, Peter served as  Church of the Epiphany’s Senior Associate Rector.  Married to Andrea, the Franks have two daughters, Cecilia and Clare. Before coming to Epiphany in January of 2011, Peter served as priest associate at Grace Anglican Church in Mount Washington, PA, as well as communications director for the Anglican Church in North America and the Anglican Diocese of Pittsburgh. Peter has a Master of Divinity degree from Trinity School for Ministry, Ambridge, PA, and a Bachelor of Arts in Classical Studies and Religion from Concordia College, Moorhead, MN. A newspaper editor before attending seminary, Peter loves telling the story of Jesus, reading history and P.G. Wodehouse novels, and spending time outdoors hunting, hiking, and camping.